Prior to the outbreak of World War II, Henryk Ross1 was a sports photographer. Not long after Germany invaded Poland, an area of Łódź , itself a centrally located city of Poland was closed off and sealed. Ross was forced to live in this ghetto.

Ross managed to get a job as one of the official photographers of the ghetto. Along with his colleague Mendel Grossman, Ross was in charge of producing identity and propaganda photographs for the Department of Statistics.

Due to his task, Ross had access to film and processing facilities. His task  was to show the Jews living a normal life in the ghetto. Outside of his official duties, he used his camera to produce a clandestine diary of the atrocities of the ghetto.

Ross’s photography within the ghetto may be seen in three parts:

He was in charge of taking photographs of the ghetto inhabitants, documenting products made in the ghetto and producing propaganda photos required by the Germans to misrepresent life in the ghetto so as to hood-wink the outside world. 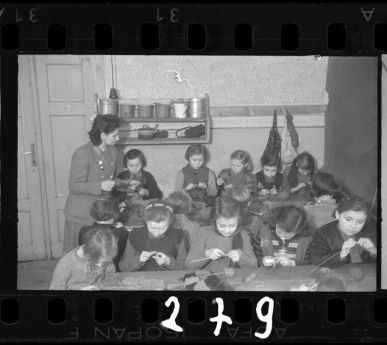 An intriguing aspect of Ross’s photography was his ability to capture the normality of life. He took photographs of the normal day-to-day  lives of the inhabitants of the ghetto- a kissing couple, birthday parties, the tenderness of a mother’s love. Though, the term normal is misleading. There were the privileged ones and the not so privileged. Of the 230,000 inhabitants of the  Łódź Ghetto,  nearly 20% (40,000) starved to death. 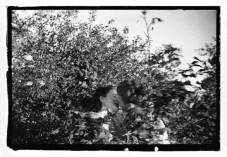 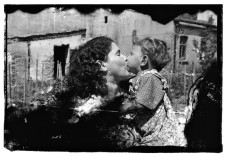 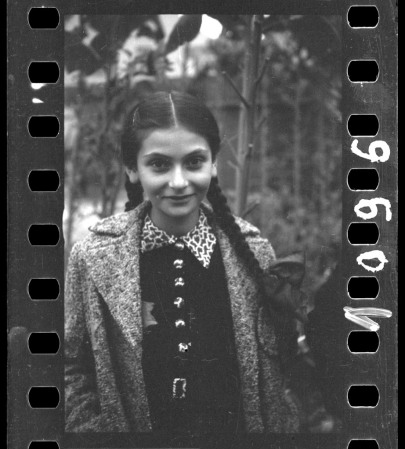 On the side, in fact secretly, he took photos of the ‘real’ life in the ghetto. 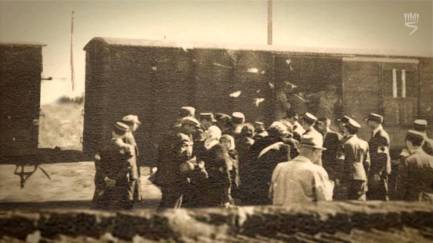 Ross  hid a whole day in a shed at the railway sidings to record Jews from the ghetto being loaded onto trains for deportation to the camps. 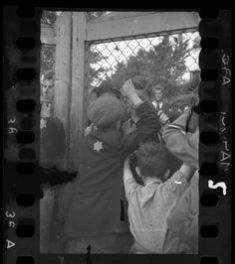 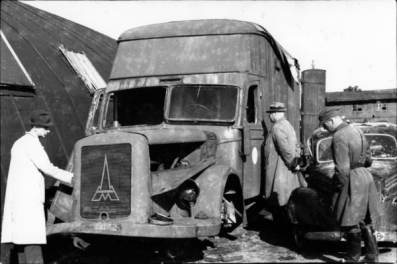 When German forces occupied Łódź on 8 September 1939, the city had a population of 672,000 people. Over 230,000 of them were Jewish. Only 10,000 of those are considered to have survived the holocaust while a mere 800 were found in hiding by the Soviets who liberated the ghetto in 1944. 95% of the 230,000 inhabitants are thought to have perished as part of the Nazi’s Final Solution.

The Łódź ghetto was four square kilometres of which only half was habitable. There was no farmland, therefore, there was no way to grow

The accused2  was found guilty of theft for using a wire rod to reach through the ghetto fence for four potatoes. For this offence he was sentenced to four weeks in prison, a fine of one mark, and the cost of the trial. (Date:1942 May 25)

The leader of Łódź ’s Jewish Council was Chaim Rumkowski3.

Rumkowski believed that the best way for the Jews to survive was for them to become indispensable to that German war machine. To that end, he turned the ghetto into a thriving industrial zone — adults worked in factories that produced everything from textiles to munitions. Young girls were even trained to hand stitch the emblems for the uniforms of German soldiers.

In some way, Rumkowski was correct. The Łódź Ghetto was the last to be liquidated and that was  mainly due to the Nazi’s realising in the summer of 1944 that the war was lost.

For all his loyalty/collaboration to the Nazi’s, they showed little gratitude — In August of 1944 Chaim Rumkowski voluntarily boarded a train headed for Auschwitz in order to accompany his brother Jozef who was forcibly deported to the death camp. It is widely accepted that Rumkowski was beaten to death by one of the Sonderkommando’s in Birkenau (Auschwitz 2), made up of Jews from the Łódź ghetto. His body was believed to have been thrown into an open pit and burned.

Ross’s photography was true documentary style4. Each subject taking a central position in the print. His aesthetic was one of realism— what you see is what you get. Unlike the photograph of the child in the Warsaw 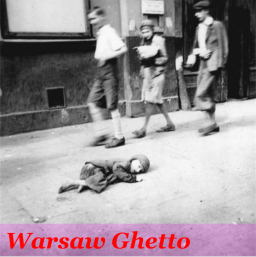 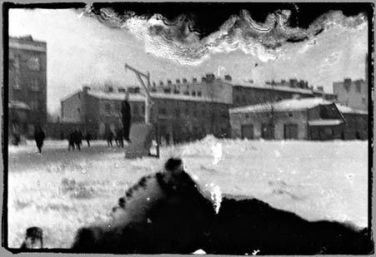 Ghetto which might be classed as counter-propaganda. There is a style in that photograph— the photographer waiting on the passing children. Even in all of its callous inhumanity, there is a stagedness about it.

The aesthetic is one more for shock than for realism which is not evident in Ross’s work. Given the clandestine  nature of Ross’s work, he could not have staged his shots (most were taken from under his coat)but as a sports photographer he would not have been predisposed to staging his photographs anyway.

As André Bazin, the French Film Theorist, states of a photograph of an object that, in effect, the photograph becomes that object caught in a instance of time like an insect in amber. Ross’s photographs serve as the only proof of the existence of virtually all his subjects (95% perished). In some way, these photographs are a concrete example of Bazin’s theory since there are no family memories of many of these people, because no family members were left alive. There are no graves — even if there were graves, there is no one to visit them.

Just before the closure of the ghetto (1944) I buried my negatives in the ground in order that there should be some record of our tragedy, namely the total elimination of the Jews from Łódź  by the Nazi executioners. I was anticipating the total destruction of Polish Jewry. I wanted to leave a historical record of our martyrdom.

In 1944, the Germans started the liquidation of the Lodz ghetto and to deport the remaining Jews to Chelmno and Auschwitz. 800 Jews were left behind in order to clean it and 8 mass graves were prepared for them. Ross stayed behind in the ghetto as part of this clean-up commando. However, the Nazis did not manage to murder them before the arrival of the Soviet army and the liberation of the ghetto in January 1945.

Ross and his wife emigrated to Israel at the end of the war. Some time later, he returned to Łódz and dug up the negatives he’d hidden. Water had infiltrated the container in which they’d been buried, and many of the negatives were damaged or destroyed.

He saved what he could and brought them back to Israel. There he put them aside until 1961, when Adolf Eichmann (one of the chief architects of the Holocaust) was captured and put on trial. Ross offered the prosecution photographic evidence of the crimes committed in Łódź. His evidence and testimony helped convict Eichmann. 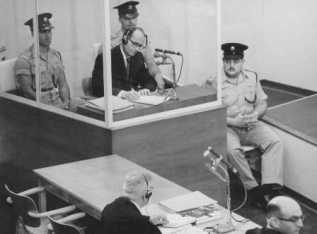 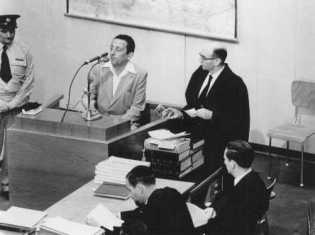 Henryk Ross testifies during Adolf Eichmann’s trial.  To the right of Ross is chief prosecutor Gideon Hausner, who holds some of Ross’ photographs submitted as evidence  (Jerusalem, Israel, May 2, 1961). 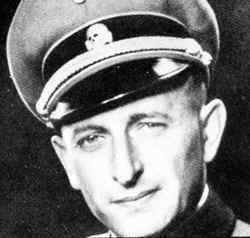 Adolph Eichmann (left) came from a middle class protestant family in Germany.  He rose through the ranks of the Nazi party and was viewed as the chief leader of “The Final Solution,” the murder of 6 million Jews in concentration camps.  After the war he escaped to Argentina until May of 1960 when he was arrested and brought back to Israel to stand trial.  Everyone who saw him was amazed at his ordinary appearance.  They expected him to look more sinister and imposing but he looked… normal. Following his widely publicised trial in Israel, Eichmann was found guilty of war crimes and hanged in 1962.

Though not a collaborator in the classic sense (Ross was privileged and his family benefitted), Ross’s work did benefit the Nazi’s as did Rumkowski’s. There is one major difference between the two— had Ross been caught, he would have in no doubt been summarily executed. Presumably, the same fate too, would have befallen his family.

Therefore, it could be presumed that he used his position of privilege for a far nobler cause risking his own life and that of his family so as to document the atrocities that befell the Jewish peoples of Europe.

Due to the matter-of-factness of Henryk Ross’s photography, there is a greater poignancy to his work than, say, a work that employed shock tactics. The viewer is allowed to make up her own  mind.

Ross’s fellow photographer, Mendel Grossman, secretly photographed in the Ghetto too, continuing even when he was deported to the Konigs 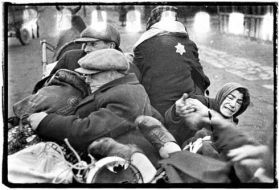 Wusterhausen camp but he did not survive the final forced death march as the Russians approached the camp. 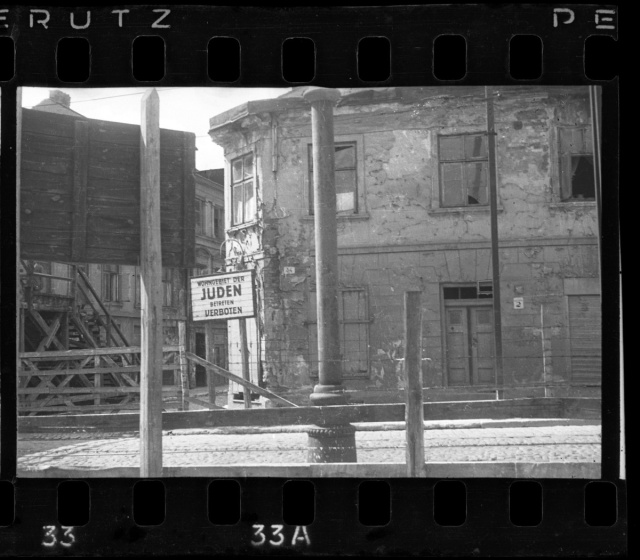 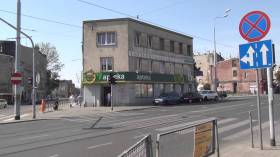 The building (above also) on the corner housed the branch office of the Lodz Gestapo and the 6th District of the Schupo during the war. Here the ghetto was submitted to political and police supervision